‘Our futures are being stolen!’ Youth activists tell COP27 negotiators it’s past time to tackle ‘loss and damage’ 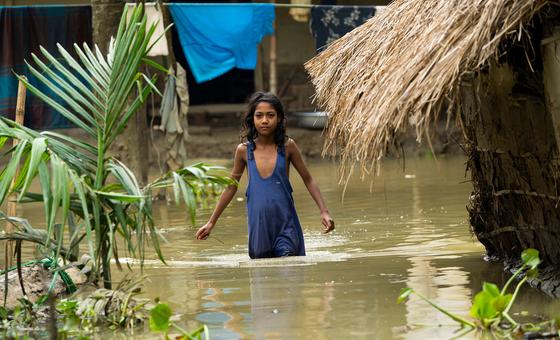 “There are climate catastrophes and destruction, and my country ends up borrowing money from the International Monetary Fund and the World Bank to deal with the repercussions… Our countries cannot develop because of the costs of the climate crisis,” a young African activist said during one of the many protests that took place today at the Tonino Lamborghini International Conference Centre.

“Our futures are being stolen from us! This is an injustice!” he declared.

‘Loss and damage’ refers to costs that are being incurred by countries that have contributed the least to climate change but are bearing the brunt of its impacts, such as sea-level rise and increasingly common extreme weather events. 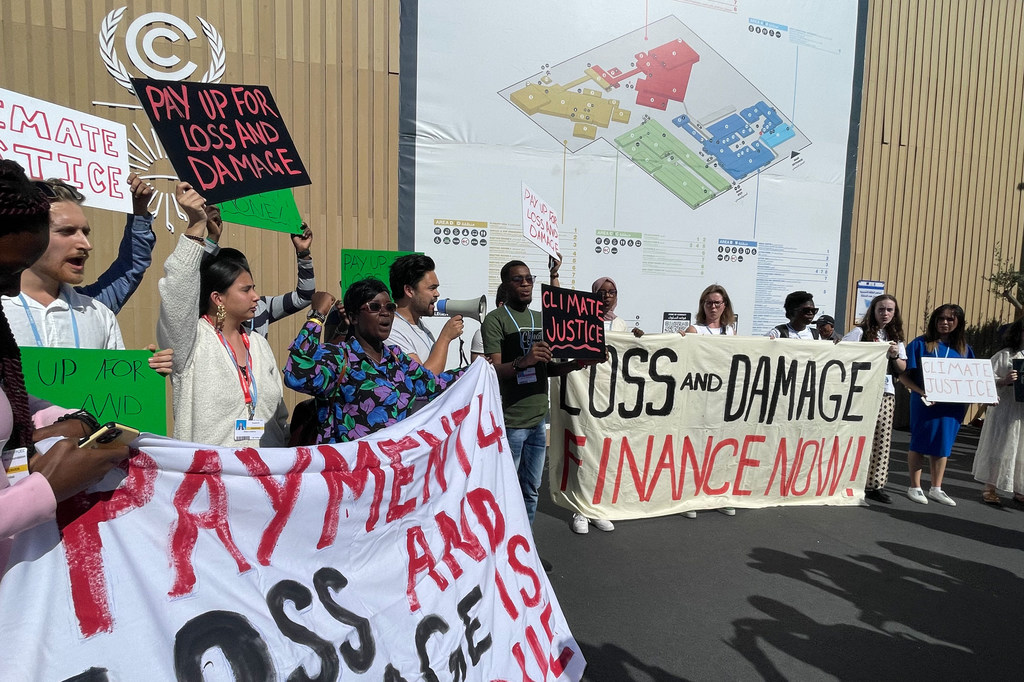 Currently, developing countries such as Pakistan, Bangladesh and a good number of African nations, are forced to pay very high costs to recover from climate-induced disasters, and the youth believe that it is time for big polluters to pay their ecological debt.

“This is an issue that has been put aside COP after COP. The fact that we are in an African country this year is very significant. It is a scientific fact that countries with the least economic resources and with barely any responsibility for emissions are the ones that end up suffering the most... It is about reparation and social justice,” Bruno Rodriguez, Argentine youth activist told UN News.

The call from the youth was clear: They want the establishment of a loss and damage finance facility that can provide additional and readily accessible funding to help developing nations adjust to and limit the “irreversible life changing impacts on young people.”

“We don’t want loans; we don’t want more debt. Pay up now for loss and damage,” was the message of an activist from the Philippines. 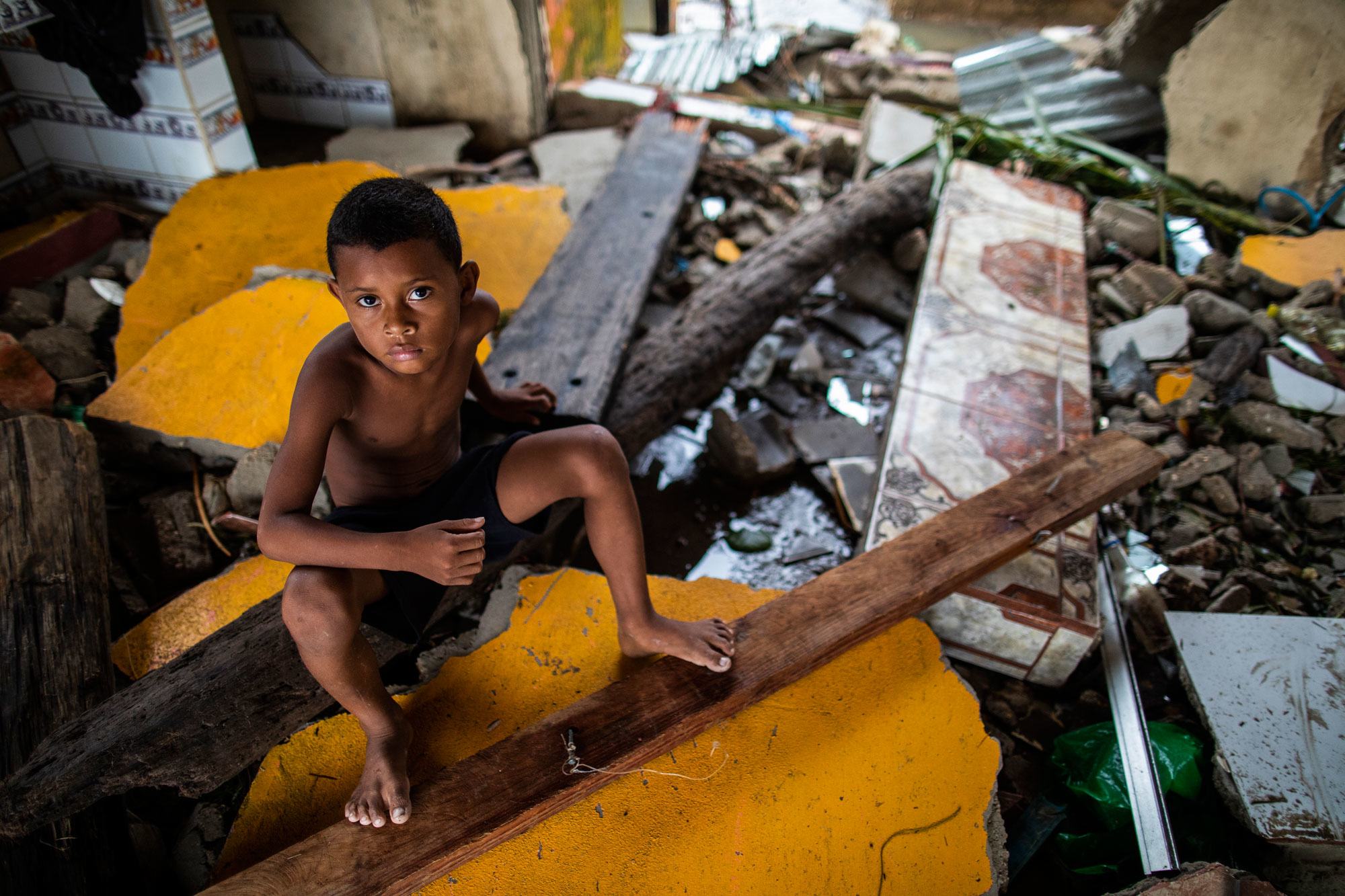 A boy sits on the debris of his house which was destroyed in Hurricane Iota in Bilwi, Nicaragua.

The yearly 10 New Insights in Climate Science report, which, as its name indicates, delivers a concise synthesis of the most pressing findings on climate change-related research to inform COP negotiations, also highlighted the importance of addressing loss and damage, calling it an “urgent planetary imperative”.

During the report’s release this Thursday, which coincided with ‘Youth and Science Day’ at COP27, scientists underscored that losses and damages are already occurring and will increase significantly based on current trajectories models.

“While many losses and damages can be calculated in monetary terms, there are also non-economic losses and damages that need to be better understood and accounted for,” the report’s authors warned, calling for an “urgent” coordinated global policy response on the matter.

The insights document, compiled by the Climate Research Programme and supported by UN Climate Change (UNFCCC), also highlights that many of these consequences cannot be avoided with mere adaptation measures and that acting swiftly to reduce emissions is a much better option.

“The report says that the potential to adapt to climate change is not limitless, and that will not prevent all losses and damage that we can see now… I applaud parties for getting lost in damage onto the agenda here at COP27,” declared UNFCCC chief Simon Stiell.

However, he said, responding for loss and damage does not let countries off the hook regarding their emissions.

For the authors of the report, the reality that tens of thousands of people are dying from climate change impacts right now, needs to be at the heart of negotiations.

They also highlighted that over three billion people will inhabit ‘vulnerability hotspots’ – areas with the highest susceptibility to being adversely affected by climate-driven hazards – by 2050, double what it is today.

Some of the other insights in the report include warnings that climate migration, health risks, and national security issues are increasing because of climate change. You can find them all here.

Letters of the children and the youth as seen as their dedicated pavilion at COP27.

On their day, the young adults, teens and children at COP27 took part in different “takeovers” and were seen – and heard – in almost every corner of the conference centre.

They expressed themselves not only by protesting, but also with music, dance, colorful attire and wall drawings with messages to world leaders.

Another chants heard today was “kick polluters out” as three NGOs denounced that on the list of registered participants – which is now up to over 45,000 according to the UNFCCC – there are over 600 fossil fuel lobbyists, an increase of 25 per cent compared to last year.

“The influence of fossil fuel lobbyists is greater than frontline countries and communities. Delegations from African countries and indigenous communities are dwarfed by representatives of corporate interests,” a group of protesters from the organization Kick Big Polluters Out shouted at the main square.

Ambassador Wael Aboulgmagd, Special Representative for the COP27 Egyptian Presidency, said during a press conference that while he could not tell whether these attendees were lobbyists or just members or certain entities, there were indeed many industries contributing to emissions present, such as cement and fertilizer companies. But they were not participating in the negotiations, he clarified.

He said that he expected that during Decarbonization Day, which will be Friday, many of them will demonstrate how they are moving forward on reducing their emissions.

Regarding the overall negotiations, Mr. Aboulgmagd said that there is now a first draft decision text for the mitigation work programme that shows “very good progress”, and that on Saturday morning, delegations would begin providing inputs for the outcome document of COP27.

Want to know more? Check out our special events page, where you can find all our coverage of the COP27 climate summit, including stories and videos, explainers, podcasts and our daily newsletter.