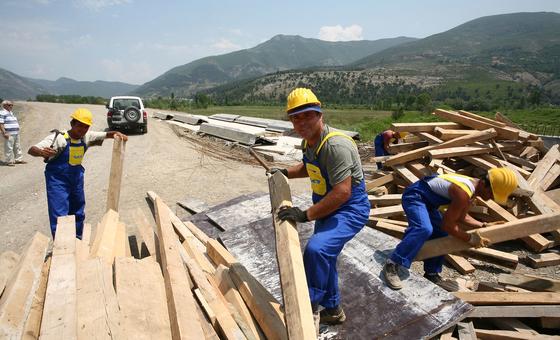 “Years of warnings about the impacts of climate change have become a reality,” said Inger Andersen, UNEP Executive Director. “If we do not rapidly cut emissions in line with the Paris Agreement, we will be in deeper trouble.”

According to a report from the UN agency, more than 34 per cent of global energy demand in 2021 came from the sector, along with around 37 per cent of “energy and process-related” CO2 emissions.

Data crunched for the UNEP publication ahead of COP27 climate talks in Egypt, also found that 2021 CO2 emissions were five per cent higher than in 2020 and two per cent more than the pre-pandemic peak in 2019.

This was despite a 16 per cent investment boost for energy-efficient new-builds, to $237 billion, which UNEP explained had been simply “outpaced” by the growing amount of floor space that is being built.

In 2021, demand for heating, cooling, lighting and equipment in buildings increased by around four per cent from 2020 and three per cent from 2019, UNEP said, indicating that the gap between the sector’s climate performance and the need to decarbonize by 2050 is widening.

From a regional perspective, UNEP noted that Africa was set to see raw resource use, double by 2060, with “an estimated 70 per cent” of buildings for 2040 still on the drawing board.

This is in line with estimates that Africa’s population is set to reach 2.4 billion by 2050, 80 per cent living in cities, and the reason why the continent could make use of its renewable energy sources to power its buildings sustainably, UNEP said.

“Steel, concrete and cement (are) already major contributors to greenhouse gas emissions,” the UN agency explained, adding that building materials already account for around nine per cent of energy-derived CO2 emissions on the continent.

On Europe, UNEP noted that the buildings sector accounted for 40 per cent of Europe’s total energy needs, and that 80 per cent of that came from fossil fuels. “This makes the sector an area for immediate action, investment, and policies to promote short and long-term energy security,” Ms. Andersen said.

To reduce overall emissions, the UN agency explained that the building sector could help by:

Key global trends identified by UNEP indicated that the increase in built floor space between 2015 and 2021 was equivalent to the total land area covered in buildings in in Germany, France, Italy and Netherlands.