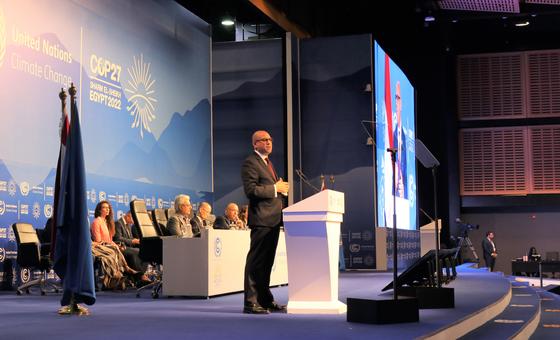 “Today a new era begins – and we begin to do things differently. Paris gave us the agreement. Katowice and Glasgow gave us the plan. Sharm el-Sheik shifts us to implementation. No one can be a mere passenger on this journey. This is the signal that times have changed,” Mr. Stiell told delegates gathered in the main plenary room of the Tonino Lamborghini International Convention Centre.

The UN climate chief said leaders –be they Presidents, Prime Ministers or CEOs – would be held to account for promises they made last year in Glasgow.

“Because our policies, our businesses, our infrastructure, our actions, be they personal or public, must be aligned with the Paris Agreement and with the [UN Climate] Convention”, he underscored.

The UNFCCC convention entered into force on 21 March 1994 to prevent “dangerous” human interference with the climate system. Today, ratified by 198 countries, it has near-universal membership. The Paris Agreement, agreed in 2016, works as an extension of that convention.

Outside the plenary hall at the COP27 conference centre, Sharm El-Sheikh

Deliver what has been promised

Acknowledging the current complex geopolitical situation, Mr. Stiell said that COP27 is an opportunity to create a safe political space, shielded from whatever is going on “out there”, to work and deliver world change.

“Here in Sharm el-Sheikh, we have a duty to speed up our international efforts to turn words into actions”, he emphasized.

The UNFCCC Executive Secretary underlined three critical lines of action for the Conference:

“I welcome detailed plans on how we deliver what we have promised”, he told delegates.

Mr. Stiell, dubbing himself an “accountability chief”, stated that 29 countries have now come forward with tightened national climate plans since COP26, five more since the publication of last week’s UNFCCC NDC Synthesis report, but still not a majority.

“So here I am now, looking out at 170 countries that are due to be revisiting and strengthening their national pledges this year,” he said.

He reminded delegates that last year the Glasgow Climate Pact was agreed at COP26, and he expected them not to rescind their word.

“Stick to your commitments. Build on them here in Egypt. I will not be a custodian of back-sliding,” he said.

People protest in Nürnberg, Germany, as part of the Global Climate Strike.

In words that drew an ovation in the plenary room, the UN climate chief underscored that women and girls must be placed at the centre of climate decision-making and action.

“Their empowerment leads to better governance and better outcomes,” he said, also highlighting the importance of civil society organizations and the youth in the COP27 process.

Mr. Sharma reviewed the achievements made at Glasgow last year, such as finalising the so-called Paris Rulebook – the the guidelines for how that Agreement is delivered – and making stronger finance commitments.

“The UN Secretary-General has said ‘our shared long-term futures do not lie in fossil fuels’, and I agree with him, wholeheartedly”, he said.

According to the COP26 President, if all commitments made last year, including the net-zero pledges, were to be implemented, the world would be on a path to 1.7 degrees Celsius warming by the end of the century.

“Still not 1.5C, but progress,” he said, recognising the scale of the challenge that the world is facing.

“As challenging as our current moment is, inaction is myopic, and can only defer climate catastrophe, we must find the ability to focus on more than one thing at once”, he urged. 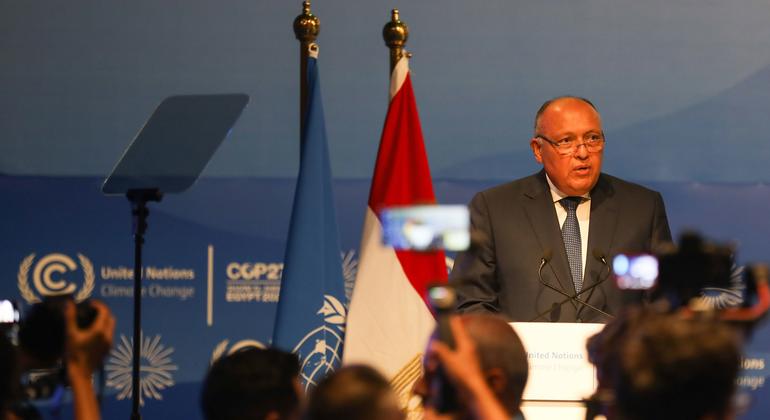 COP27 President Sameh Shoukry called on delegates to scale up ambition and begin implementing the promises already made.

“Moving from negotiations and pledges to an era of implementation is a priority,” he said, later commending the countries which have already shared updated national climate plans.

Mr. Shoukry added that the $100 billion promised for adaptation by developed countries to developing countries should be delivered, and finance must be also at the centre of discussion.

“The negotiations [during the next two weeks] will hopefully be fruitful. I urge all of you to listen carefully and commit to implementation and to turn political commitments into agreements and understandings and texts and resolutions that we can all implement,” he underscored.

He also warned that “zero-sum games will have no winners” and that the implications of the negotiations will affect the lives and livelihoods of millions of people around the world suffering the impact of climate change.

“We cannot afford any negligence or shortcomings; we cannot threaten the future of upcoming generations”, he emphasised. 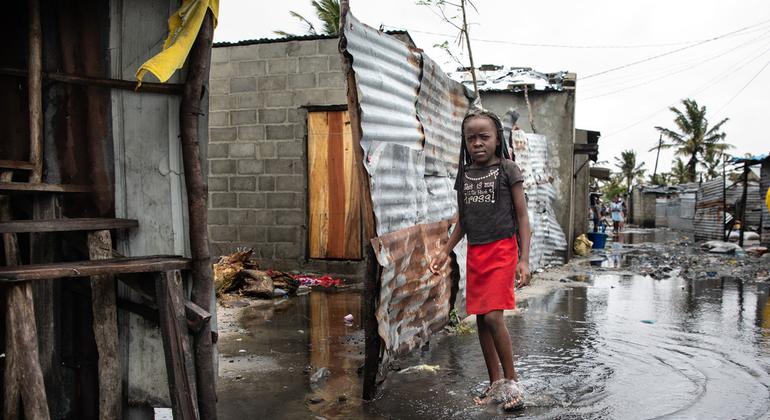 Also on Sunday, the agenda items that will be discussed over the next two weeks at COP27 were agreed during the procedural opening.

‘Loss and damage’, an item that was still uncertain ahead the conference, finally made it into the agenda after being put forward by negotiators from the Group of the 77 and China (which essentially includes all developing nations) and after extensive discussions among the 194 parties to the UN Climate Convention.

Because the intensification of these otherwise “natural disasters” is being caused by the rise in greenhouse gas emissions, mostly from rich industrialized countries, developing countries – often the most affected – have long argued that they should receive compensation.

The issue of these payments, known as “loss and damage” now will be a major topic of discussion at COP27.

Want to know more? Check out our special events page, where you can find all our coverage of the COP27 climate summit, including stories and videos, explainers, podcasts and our daily newsletter.