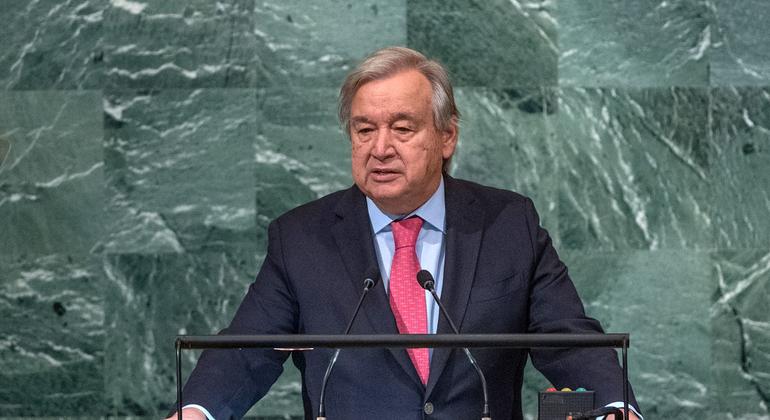 Delivering a powerful address to world leaders gathered for the opening day of the General Assembly’s high-level debate, the Secretary-General said: “Our world is in big trouble. Divides are growing deeper; inequalities are growing wider; challenges are spreading father… we need hope… we need action across the board.”

With evocative images of the Brave Commander, one of the vessels that has been carrying tonnes of Ukrainian wheat bound for points in Ethiopia, Yemen and beyond, showing behind him on the walls of the iconic General Assembly Hall, Mr. Guterres said the ship, and the UN-brokered Black Sea Grain Initiative that had launched it were not symbols of conflict and hunger but of hope born of cooperation.

“It sailed the Black Sea with the UN flag flying high and proud.  At its essence, this ship is a symbol of what the world can accomplish when we act together. Ukraine and the Russian Federation – with the support of Türkiye – came together to make it happen – despite the enormous complexities, the naysayers, and even the hell of war. This is multilateral diplomacy in action. Each ship is also carrying one of today’s rarest commodities: Hope,” he stated.

A winter of our global discontent

Presenting his Annual Report on the Work of the Organization, the Secretary-General said soberingly: “Let’s have no illusions. We are in rough seas. A winter of global discontent is on the horizon. A cost-of-living crisis is raging. Trust is crumbling. Our planet is burning. People are hurting – with the most vulnerable suffering the most. The United Nations Charter and the ideals it represents are in jeopardy.”

Along with the climate emergency and biodiversity loss, and the war in Ukraine, the UN chief said of crises like the dire financial situation of developing countries and the fate of the Sustainable Development Goals (SDGs), “a forest of red flags across a host of new technologies”, rising hate speech and “out of control” digital surveillance, “we don’t have the beginning of a global architecture to deal with any of this.”

Indeed, he said, progress on all these issues and more is being held hostage to geopolitical tensions.

The Secretary-General, lamented that our world is in peril and paralyzed by political divides that were undermining the work of the Security Council, international law, trust and people’s faith in democratic institutions, and all forms of international cooperation.

No cooperation. No dialogue. No collective problem solving, ‘but the reality is that we live in a world where the logic of cooperation and dialogue is the only path forward.