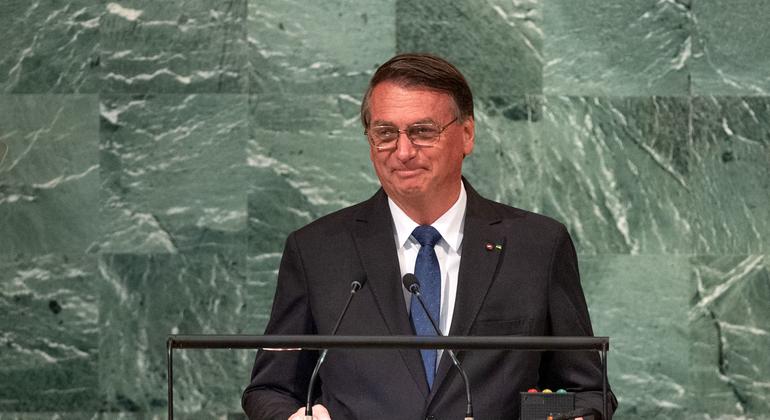 “Our collective responsibility… is to understand the scope of the challenges that make up this watershed moment,” he said, making reference to the theme of this year’s General Debate. “And, from there, build responses that pull their strength from the objectives that are common to all of us.”

This effort, he continued, must begin within each country.

“It is what we do at the domestic level that gives the measure of authority with which we act internationally.”

Mr. Bolsonaro went on to highlight his Government’s efforts to save lives and preserve jobs during the Covid-19 pandemic, including by ensuring emergency financial assistance to those most in need and launching a broad vaccination programme that resulted in more than 80 per cent of the country’s 210 million people receiving vaccines.

These and other measures mean that Brazil’s economy is in full recovery mode.

“The economy is back on the path of growth,” said the President. “Poverty has increased across the world under the impact of the pandemic. In Brazil, it began to fall sharply.”

He said it is estimated that, by the end of 2022, four per cent of Brazilian families will be living on less than $1.90 a day – down from 5.1 per cent in 2019. In addition, both unemployment and inflation rates have fallen, and Brazil was the fourth largest destination for foreign direct investment in 2021.

He also cited strides in food production, making Brazil one of the world’s largest food exporters, as well as achievements in the area of sustainable development, including ensuring that more than 80 per cent of the Amazon Forest remains untouched and modernizing the biofuel industry.

“We have the peace of mind of those who are on the right path. The path to shared prosperity,” said Mr. Bolsonaro. “Shared among Brazilians and, beyond that, shared with our neighbours and other partners around the world.”

At the same time, he noted that the sustainable development agenda is impacted in many ways by threats to international peace and security, including the ongoing conflict in Ukraine – the fallout of which can already be felt in the global prices of food, fuel and other raw materials.

“We support all efforts to reduce the economic impacts of this crisis. But we do not believe that the best way is to adopt unilateral and selective sanctions, that are inconsistent with international law,” he stated.

“The solution to the conflict in Ukraine will only be achieved through negotiation and dialogue.”