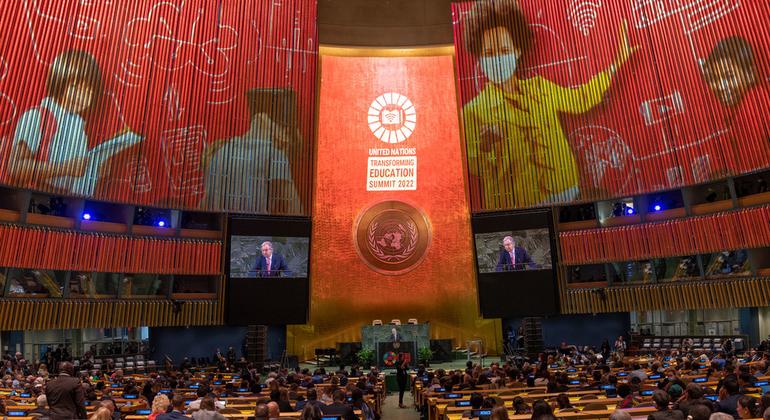 “I regard myself as a lifelong student…Without education, where would I be? Where would any of us be?”, he asked those gathered in the iconic Generally Assembly Hall.

Because education transforms lives, economies and societies, “we must transform education”.

Instead of being the great enabler, the UN chief pointed out that education is fast becoming “a great divider”, noting that some 70 per cent of 10-year-olds in poor countries are unable to read and are “barely learning”.

With access to the best resources, schools and universities, the rich get the best jobs, while the poor – especially girls – displaced people, and students with disabilities, face huge obstacles to getting the qualifications that could change their lives, he continued.

“But the education crisis began long before – and runs much deeper”, Mr Guterres added, citing the International Commission on the Future of Education report card, which clearly stated: “Education systems don’t make the grade”.

Dependent upon outdated and narrow curricula, under-trained and underpaid teachers, and rote learning, he maintained that “education is failing students and societies”.

At the same time, the digital divide penalizes poor students as the education financing gap “yawns wider than ever”.

“Now is the time to transform education systems”, underscored the UN chief.

With a new 21st century education vision taking shape, he flagged that quality learning must support the development of the individual learner throughout their life.

“It must help people learn how to learn, with a focus on problem-solving and collaboration…provide the foundations for learning, from reading, writing and mathematics to scientific, digital, social and emotional skills…develop students’ capacity to adapt to the rapidly changing world of work…[and] be accessible to all from the earliest stages and throughout their lives”.

At a time of rampant misinformation, climate denial and attacks on human rights, Mr. Guterres stressed the need for education systems that “distinguish fact from conspiracy, instill respect for science, and celebrate humanity in all its diversity”.

From vision to reality

Children sit in a circle with their teacher at the Early Child Development centre in Garin Badjini village, south east Nigeria.

To make the vision a reality, he highlighted five commitment areas beginning with protecting the right to quality education for everyone, everywhere – especially girls and those in crisis hotspots.

Emphasizing that schools must be open to all, without discrimination, he appealed to the Taliban in Afghanistan: “Lift all restrictions on girls’ access to secondary education immediately”.

As “the lifeblood of education systems,” Mr. Guterres next called for a new focus on the roles and skillsets of teachers to facilitate and promote learning rather than merely transmitting answers.

Third, he advocated for schools to become “safe, healthy spaces, with no place for violence, stigma or intimidation”.

To achieve the fourth target, that the digital revolution benefits all learners, he encouraged governments to work with private sector partners to boost digital learning content.

“None of this will be possible without a surge in education financing and global solidarity”, said the UN chief, introducing his final priority.

“Education financing must be the number one priority for Governments. It is the single most important investment any country can make in its people and its future,” spelled out the Secretary-General. “Spending and policy advice should be aligned with delivering quality education for all”.

In closing, he stated that the Transforming Education Summit will only achieve its global goals by mobilizing “a global movement”.

“Let’s move forward together, so that everyone can learn, thrive and dream throughout their lives. Let’s make sure today’s learners and future generations can access the education they need, to create a more sustainable, inclusive, just and peaceful world for all”.

Catherine Russell, who heads the UN Children’s Fund (UNICEF) drew attention to the effect of war on children’s education, calling on governments to “scale up support to help every child learn, wherever they are”.

Winnie Byanyima, Executive Director of UNAIDS, highlighted the devastating impact of HIV on adolescent girls and young women in Africa, informing the participants that in sub-Saharan Africa last year, 4,000 girls had been infected every week.

“This is a crisis!” she said. “Because when a girl is infected at that early age, there’s no cure for HIV, that marks the rest of their lives, their opportunities”.

Audrey Azoulay, leader of the UN Educational, Scientific and Cultural Organization (UNESCO) reminded that “there can be no economic development and no peace without education,” and underscored that Afghan girls must be able to go back to school. “It is their right”, she upheld. Watch here deliver her address here.

Other distinguished speakers included UN Messenger of Peace Malala Yousafzai who called on world leaders to make schools safe for girls and protect every child’s right to learn, saying that “if you are serious about creating a safe and sustainable future for children, then be serious about education”.

Somaya Faruqi, former Captain of the Afghan Girls Robotics Team avowed that every girl has a right to learn, asserting that “while our cousins and brothers sit in classrooms, me and many other girls are forced to put our dreams on hold. Every girl belongs in school”.

Newly announced UNICEF Goodwill Ambassador, Vanessa Nakate, stressed the need to for all children to have access to education, as “their future depends on it”. Watch her address here.

Another highlight was a stirring musical performance by UNICEF Goodwill Ambassador Angelique Kidjo, who encouraged everyone to raise their voice for transforming education.