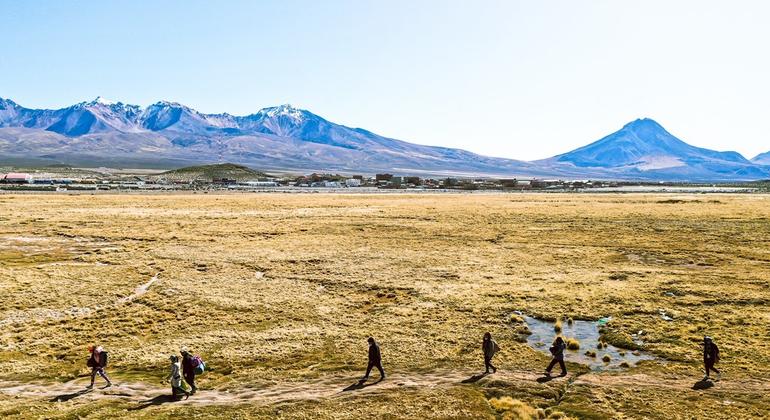 Jhonny, 26, along with his pregnant wife, Cribsel, 19, sits with their two children at a migrant reception centre in Chile. The 3,700-meter-high altitude and freezing climatic conditions have noticeably taken their toll on this young family of four. They are sunburned and gasping for breath.

The family trekked for five hours from Bolivia to Chile, but this was just the last stage of a two-month odyssey, taking in some 5,000 kilometres on foot, five border crossings, whilst evading dangerous criminal groups.

“It was the first time we experienced cold weather. This part has been the toughest,” Jhonny says, with split lips and cracked feet. “We were not prepared with winter coats or blankets.”

In Venezuala, he had been a construction worker, but he lost his job and covering basic necessities for his family became impossible. They decided to leave their hometown of Aragua with just $450 and a backpack of essentials, to venture upon the long walk across the Andean highlands, first crossing into Colombia, and later Ecuador, Peru, and Bolivia, sleeping rough on the streets throughout most of their journey.

Their story is far from an isolated case. Often in small groups, exhausted people are on the move along one of the most extensive migration routes in the world, mainly embarking on foot with periodic intervals by bus, taxi, and other forms of transport.

For Venezuelans travelling to Chile, the last hurdle is the gruelling Atacama Desert, the driest and highest plateau in the world at nearly 4,000 meters above sea level and with temperatures dropping below minus 10 degrees Celsius.
Many migrants and refugees travel irregularly across these routes, confronting dangers such as robbery and the risk of sexual exploitation and abuse by criminal groups. Seven people have reportedly died since the beginning of 2022, either due to exposure to extreme conditions or due to health complications stemming from pre-existing medical conditions exacerbated by the inhospitable terrain of the Atacama Desert.

Venezuelan migrants Jhonny, Crisbel and their two children arrive at an IOM shelter in Chile.

‘Our goal is to work and do something constructive ‘

Near the Chilean town of Colchane, and upon crossing the shared border with Bolivia at dawn, Jhonny’s family, alongside other migrants, are relieved to find much-needed life-saving humanitarian assistance. They arrive hungry, and suffering from hypothermia, dehydration, and altitude sickness.

As of July, approximately 127,000 migrants had entered Chile in 2022 through irregular crossing, according to estimates by Chilean authorities. Many pass through Colchane, a small village of less than 500 residents, of whom 85 per cent are indigenous. They are often driven by the desire to reunify with their family members, and contribute to host communities.

“Our goal is to work and do something constructive. I want people to think of me as a Venezuelan who has something positive to give. This will help change the perception they have about us,” Jhonny adds.

Francisco, a Venezuelan migrant, and his family, at an IOM shelter.

‘We were sleeping under a blanket covered with ice’

After several trying months since first arriving in Chile, Francisco and his family have had to grapple with low-temperature conditions living on the streets of the City of Iquique, a drastic difference from the tropical conditions in their hometown. The family of five now finds refuge at a temporary shelter financed and managed by the International Organization for Migration (IOM).

“We were sleeping under a blanket covered in ice, embracing each other for warmth. We had to use our bags as pillows to prevent robbery during the night.”

Maria, 18, has finally achieved a degree of stability after giving birth to a healthy baby boy in Chile.

She now has a place to live in Iquique and is among hundreds receiving humanitarian assistance from IOM in the form of cash vouchers, hundreds of which have been distributed to vulnerable families to provide them with means to buy food, hygiene products, and warm clothing.

Janibeth, a Venezuelan migrant, at an IOM camp in Chile.

Dreaming to one day return home

Janeth Perez, 36, never thought she would one day have to leave her beloved home. Back in her native Venezuela, she was a Math and Physics high school teacher, but the financial situation forced her to leave her life and profession behind. She began the long road to Chile, alone, and with the hopes of finding a new beginning.

Following an arduous 11-day journey by bus, she recently arrived in Chile and is determined to get to the port city of Valparaiso, approximately 2,000 kilometers south of the Bolivian-Chilean border, in order to reunite with her sister and start a new life working at a supermarket.

Despite all these challenges, Janeth and many others are grateful for the opportunity to be able to work and support their families, both in Chile and back home in Venezuela. She dreams of regularizing her status, validating her university diploma and working as a teacher, her passion.

“The future I imagine is one where I can once again teach in order to earn enough money to buy a house and go back home with my son and mother to live together in peace.”