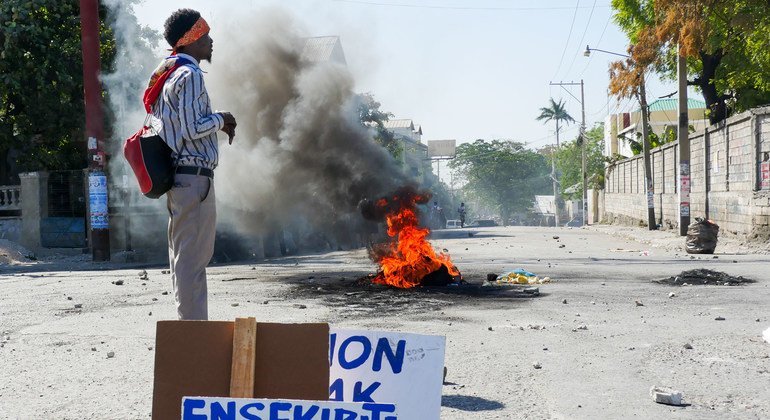 Nationwide protests sparked initially by the almost doubling of petrol prices has brought the Caribbean country to what the UN has described as a “standstill.”

Haiti is grappling with multiple crises of an economic, political, security and humanitarian nature.

The country’s President Jovenel Moïse was assassinated in July last year and in August an earthquake caused widespread death and destruction across southern regions of the Caribbean island nation.

Heavily armed violent gangs have taken over large swathes of the capital, Port-au-Prince, and kidnap local people for ransom on a regular basis. According to news reports, gunfire has been heard across the city throughout the week.

In a statement issued on behalf of the UN Secretary-General António Guterres, Mr. Dujarric, said the UN chief was “particularly preoccupied with the safety of all Haitians including the most vulnerable and calls for calm and maximum restraint.

“He urges all relevant stakeholders to take immediate steps to de-escalate the situation, avoid violence, and allow the Haitian National Police to fulfil its role to protect the population.”

The UN Chief also called on “all stakeholders to rise above their differences and to engage, without further delay, in a peaceful and inclusive dialogue on a constructive way forward”.

He warned that if the current circumstances continue, “the already dire humanitarian situation faced by Haiti’s most vulnerable people, will deteriorate even further.”

Much of the area around the city of Gonaives was in floodwaters and covered by mud after Tropical Storm Jeanne tore through Haiti. (file)

On Thursday, a warehouse used by the UN World Food Programme (WFP) in Gonaives in the north of the country, was looted and then set on fire by rioters.

The emergency food aid agency’s country director, Jean-Martin Bauer, described the incident as “simply unacceptable. The looted food was intended to feed nearly 100,000 school children until the end of the year and provide emergency assistance to Haiti’s most vulnerable families“, he said in a statement.

“WFP is in Haiti to support vulnerable communities in urgent need, while strengthening local production and livelihoods through our long-term resilience initiatives.”

The UN said its staff and partners remain on the ground and are ready to assist people in need across the country.

However, a shortfall in funding and difficult aid logistics – including risks to supplies on the ground – means that WFP said will likely struggle to supply aid in the coming days.

Meanwhile, Tropical Storm Fiona has formed in the Caribbean and may impact Haiti on Monday.