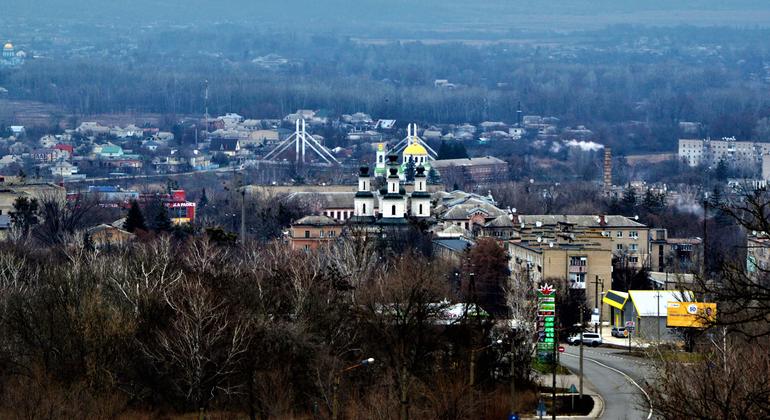 The development follows the liberation of eastern areas of Ukraine during the on-going counter-offensive, previously held by Russian or Russian-backed forces.

The @UN delivered today food, water, hygiene & shelter kits, blankets & bedding to more than 13,000 people in Shevchenkove.
This is 1st of a series of humanitarian convoys to civilians living in areas of Kharkivska oblast that became accessible to aid workers only a few days ago. pic.twitter.com/rTGZhGm6rb

One Ukrainian police officer has been quoted as saying that more than 400 bodies are believed to have been found in one location.

In Geneva on Friday, the UN human rights office, OHCHR, said that UN investigators already in Ukraine would be looking to see if those buried were soldiers or civilians, and whether they had died in hostilities or from natural causes.

“As you may recall, that was something that came up quite a lot during the fighting (during) the siege of Mariupol,” said OHCHR spokesperson Liz Throssell.

“There were these reports of collective graves; it was really a case of looking at whether people had been killed or had died of natural causes because they weren’t able to get treatment, and they had indeed been buried in collective graves.”

There have been numerous allegations about atrocities committed against civilians since the Russian invasion of Ukraine on 24 February.

In May, the UN Human Rights Monitoring Mission in Ukraine took testimonies from Ukrainians who said that snipers positioned on roofs “would just shoot fairly randomly at civilians” to discourage them from leaving their homes.

And in Bucha and other suburban towns north of Kyiv that were overrun by Russian troops, the same investigators recorded the unlawful killing of over 300 men, women and children.

At a press conference in Geneva in May, the head of the monitoring mission, Matilda Bogner, told UN News that many Ukrainians continued to search for missing relatives and friends – mainly young men. Some may have been taken to Belarus and then Russia, Ms. Bogner said.

Next post Beware the ‘poison of war’ says Guterres, championing a ‘call for peace’
Delade Nyheter