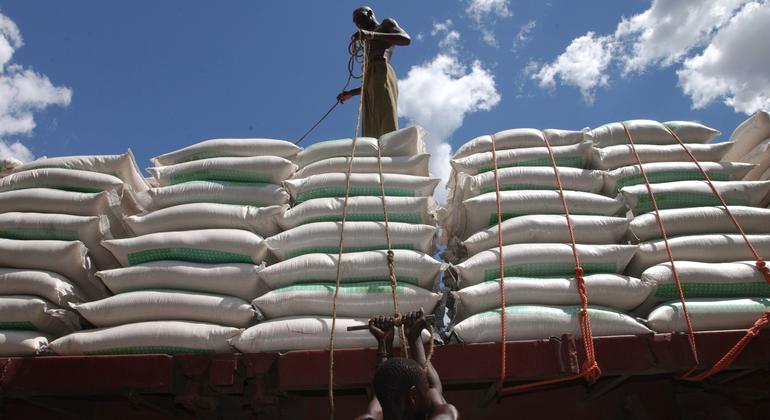 1) A deal to get vital supplies moving again

Ukraine, one of the world’s largest grain exporters, normally supplies around 45 million tonnes of grain to the global market every year but, following Russia’s invasion of the country, in late February 2022, mountains of grains built up in silos, with ships unable to secure safe passage to and from Ukrainian ports, and land routes unable to compensate.

This contributed to a jump in the price of staple foods around the world. Combined with increases in the cost of energy, developing countries were pushed to the brink of debt default and increasing numbers of people found themselves on the brink of famine.

On 22 July, the UN, the Russian Federation, Türkiye and Ukraine agreed the Black Sea Grain Initiative, at a signing ceremony in the Turkish capital, Istanbul.

The deal allowed exports from Ukraine of grain, other foodstuffs, and fertilizer, including ammonia, to resume through a safe maritime humanitarian corridor from three key Ukrainian ports: Chornomorsk, Odesa, and Yuzhny/Pivdennyi, to the rest of the world.

To implement the deal, a Joint Coordination Centre (JCC) was established in Istanbul, comprising senior representatives from the Russian Federation, Türkiye, Ukraine, and the United Nations.

According to procedures issued by the JCC, vessels wishing to participate in the Initiative will undergo inspection off Istanbul to ensure they are empty of cargo, then sail through the maritime humanitarian corridor to Ukrainian ports to load. The corridor is established by the JCC and monitored 24/7 to ensure the safe passage of vessels. Vessels on the return journey will also be inspected at the inspection area off Istanbul.

2) Millions of tonnes are leaving Ukraine

According to UN figures, 51 per cent of the cargo so far (as of mid-September?) has been corn, 25 per cent wheat, 11 per cent sunflower products, six per cent rapeseed, five per cent barley, one per cent soya beans, and one per cent other foodstuffs.

This includes UN-chartered vessels delivering humanitarian food assistance – World Food Programme (WFP) purchased wheat – to the Horn of Africa and Yemen. Two UN-chartered ships have already left Ukraine, while another two are expected soon. WFP had so far purchased 120,000 metric tonnes of wheat to support humanitarian relief in the Horn of Africa, Yemen and Afghanistan.

This flour will then be loaded onto a different ship that will head to Yemen to support the World Food Programme’s humanitarian response there. The third and fourth WFP-chartered vessels will also supply wheat to relief operations.

Some 25 per cent of grain has gone to upper-middle income countries – including Türkiye, China and Bulgaria; and 50 per cent to high-income countries like Spain, Netherlands, Italy, Republic of Korea, Romania, Germany, France, Greece, Ireland, and Israel.

The UN points out that all of the grain coming out of the Ukrainian ports thanks to the Initiative benefits people in need, as it helps to calm markets, and limit food price inflation.

All ship movements can be found on the Black Sea Grain Initiative website, which also contains useful facts and figures.

4) Food prices are coming down

There are strong signs that the Initiative is succeeding in one of its key aims, getting food prices down.

At a press briefing in mid-September, Rebeca Grynspan, the Secretary-General of the UN trade agency, known as UNCTAD, and Amir Abdulla, the UN Coordinator for the Black Sea Grain Initiative welcomed the fact prices have come down five months in a row: the Food Price Index has decreased nearly 14 per cent from its peak in March of this year.

Mr. Abdulla explained that falling prices meant that those who had been hoarding grain, in the hope of selling at a greater profit, were now selling, which meant that there is now more food supply in the markets, leading to further price drops. Ms. Grynspan, who is also coordinator of the UN global Task Team set up to help support countries deal with the triple economic shocks worsened by the effects of the war in Ukraine, pointed out that this is making a huge difference in a global cost of living crisis.

In August, WFP Executive Director David Beasley declared getting the Black Sea Ports open to be “the single most important thing we can do right now to help the world’s hungry”. He warned that, whilst this would not, on its own, stop world hunger, bringing Ukrainian grain back on global markets would improve the chance of preventing the global food crisis from spiralling even further

The UN is acutely aware that keeping shipments sailing smoothly out of Ukrainian ports will require the continued collaboration of Ukraine and Russia. Mr. Abdulla has praised the “collaborative spirit” between the parties to the Initiative. He also noted the special role that Türkiye and the UN are playing in keeping the process moving.

However, with no clear end in sight to the war, the future is uncertain.

The current Initiative may extend beyond its initial 120 days after the signing date of 22 July, if parties so choose. Thoughts at the JCC team in Istanbul are already turning to the extension of the deal. Mr. Abdulla remains positive, expressing his hope that “with the UN’s mediation efforts, it won’t really be a matter for discussion”.