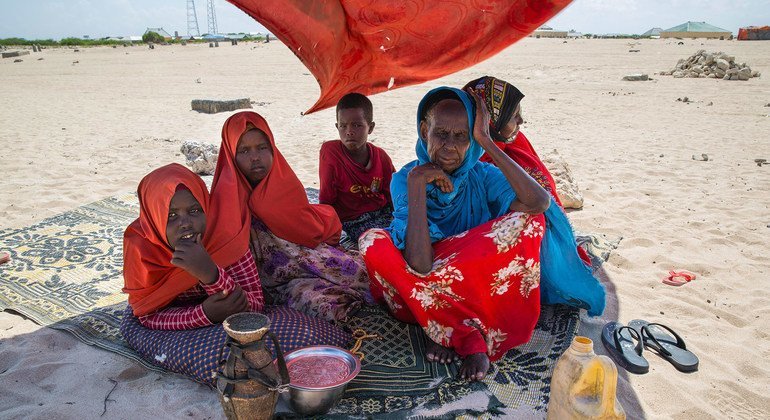 He spoke about his recent trip to Somalia, where more than 200,000 people are currently at risk of famine – a figure expected to reach 300,000 by November – “with millions more” on the verge of starvation.

Recent humanitarian assessments have identified hundreds of thousands of people facing catastrophic levels of hunger, or phase 5 of the Integrated Phase Classification system – the ultimate, most devastating stage.

“It simply doesn’t get any worse than that”, said the OCHA chief, noting that widespread suffering comes down to the direct and indirect impact of conflict and “the behaviour of the fighting parties”.

Mr. Griffiths observed that “a similar pattern recurs in each context”, outlining how civilians are killed and injured; families forcibly displaced; market and work access disrupted; food stocks looted; while overall economic decline renders food out of reach for the vulnerable.

“In the most extreme cases, fighting parties have deliberately cut off access to the commercial supplies and essential services that civilians rely on to survive,” he stated.

“Hunger is used as a tactic of war”.

While humanitarians have extended “relief lifelines”, interference, harassment and attacks often bar access to those in need.

“Humanitarians will stay and deliver, but the conditions in some contexts are unacceptable,” said the OCHA chief.

Meanwhile, drought, rising global commodity prices, and the impacts of COVID-19 and the Ukraine war are also compounding food insecurity and misery.

And people in South Sudan, Nigeria, Ethiopia, Yemen, Afghanistan, and Somalia are “quite literally on the front lines of climate change” as they confront droughts, floods, desertification and water scarcity.

Throughout seven years of the Yemeni conflict, displaced children in Marib have experienced unimaginable suffering.

More than seven years of armed conflict in Yemen has wreaked havoc and left some 19 million people acutely food insecure.

“An estimated 160,000 people are facing catastrophe, and 538,000 children are severely malnourished,” the Relief Coordinator said, warning that funding gaps may worsen the situation”.

Last year, South Sudan was one of the most dangerous places to be an aid worker, with 319 violent incidents targeting humanitarian personnel and assets.

While improvements in delivering humanitarian assistance were seen in northern Ethiopia, “the resumption of hostilities in recent weeks is undoing recent progress,” he said.

Turning to northeast Nigeria, the UN projects that 4.1 million people are facing high levels of acute food insecurity in the conflict-affected states of Adamawa, Borno and Yobe, including 588,000 people who already faced emergency levels between June and August – almost half of whom were unreachable for humanitarian assistance.

“Food security assessments could not be conducted in these areas, but we fear that some people may already be in the catastrophe level and risk death,” he said.

The humanitarian chief reminded ambassadors that actions can be taken, beginning with leaving no stone unturned in pursuing “peaceful and negotiated resolutions” to conflicts and other violent situations.

Secondly, States and armed groups must abide by their obligations under international humanitarian and human rights law to ensure unimpeded passage of humanitarian relief.

Mr. Griffiths also highlighted climate change as an issue “central to peace and security” both now “and indeed decades ahead”.

He implored all Member States to prioritize “a longer-term approach and ensure a substantial proportion of funding – as grants, not loans – for climate adaptation and mitigation”.

“Time is not on our side”, he concluded.

Time is not on our side – UN Emergency Relief Coordinator

Having just returned from a trip to Central America, World Food Programme (WFP) chief David Beasley saw firsthand how conflict is “adding fire to the flames” of what is already a severe hunger crisis.

From the arduous Darién Gap crossing point, to Guatemala, he recounted “tragic stories” from people migrating north “through sheer desperation”.

“The impact of the climate crisis and COVID’s ongoing ripple-effects have already exhausted many families’ ability to cope,” he said.

“People feel they have nothing left – they can stay and starve, or leave and risk death for the chance of a better future”.

The WFP chief argued that under threat of growing mass starvation and famine, “we are facing a global emergency of unprecedented magnitude”.

And since the Ukraine conflict began, “a wave of hunger has turned into “a tsunami”, he continued, noting that up to 345 million people in 82 countries are “moving towards starvation”.

“This is a record high – now more than 2.5 times the number of acutely food insecure people before the pandemic began”.

Mr. Beasley presented staggering statistics on the dire situation faced by hundreds of millions around the world.

As raging conflicts push millions of “blameless civilians ever closer to starvation and famine,” he asked the Council to “show the humanitarian leadership the world urgently needs right now and…break the vicious cycle of hunger and conflict, which is fuelling a global food insecurity crisis that threatens to spin out of control”.

“The hungry people of the world are counting on us to do the right thing – and we must not let them down,” concluded Mr. Beasley.

A woman carries a basket of flowers next to the cobblestone streets and crumbling walls of Antigua, Guatemala.