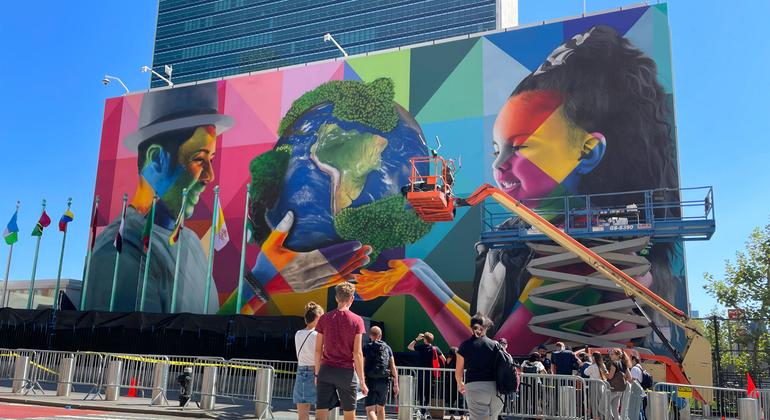 Spreading along the First Avenue entrance just above New York’s iconic 42nd Street, and rising above the national flags of the world which stretch uptown, the panel covers some 350 square metres, and is due to be officially launched on Friday.

The artist, who has more than 20 other works on display around the city, told UN News that it celebrates sustainability – a central theme of the debates to come next week, as the UN accelerates action towards meeting the 2030 Sustainable Development Goals (SDGs).

UN Headquarters this year, also displayed work from the artist celebrating the bicentennial of Brazil’s independence.

Some of the close-up detail from Brazilian artist Eduardo Kobra’s huge new mural dedicated to sustainablity, on the wall of UN Headquarters, in New York.

‘The future is now’

Describing his new work which has been turning heads (and blazing a trial across social media) all week, as the huge canvas nears completion, he said the themes were universal, and urgent.

“The message is about the planet we hand over to our next generations. How are we taking care of our planet? Because the future is now. The future has already begun, and we are all responsible for it.”

He said the mural features an “ordinary Brazilian” who feels the same sense that we should all feel, “for taking care of the planet.”

“In the epicentre, you can see Latin America”, he told UN News. “I placed it there precisely because of the care that we have with our dear Amazon.”

The panel features a man and a child, with planet Earth in the middle. Mr. Kobra explained that it represents a father giving his daughter a gift, reflecting what he hopes will be a new legacy of care for the environment, to be delivered to future generations.

It is due to remain on display at least until December.

Eduardo Kobra together with some of his work at a 2022 exhibition at UN Headquarters.

Working against the clock

To get everything ready in time for the start of High Level Week, which brings together Heads of State and Government from around the world, the artist and his dedicated team have been working long hours, sometimes into the night, stopping as late as 5am.

“We had two or three days of rain. The entire painting process, which is taking a week, would take longer, but we are working to make it faster.”

A further 11 paintings by Kobra were until recently on display at the delegates’ entrance to UN Headquarters. The exhibition was put together following an invitation from the UN Mission of Brazil, to celebrate the nation’s bicentennial, earlier this month.

Mr. Kobra is one of the world’s foremost street artists, and his work can be seen from Brazilian megacity São Paulo to Abu Dhabi, in the United Arab Emirates.